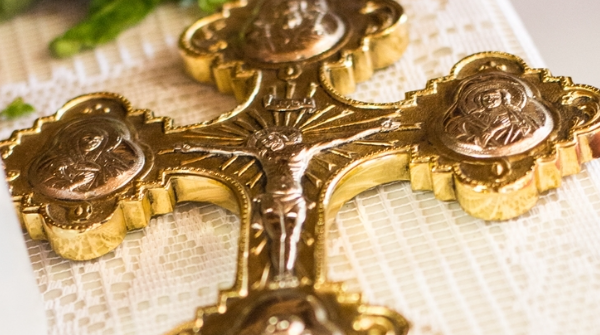 Once in a while, people ask us why we are Orthodox Christians. Initially, I was less than thrilled with my husband wanting to convert to Orthodoxy. It just seemed like a conglomeration of rules and rituals. But what finally caught my attention and softened my heart was the church’s theology on suffering. It was the first time I had ever heard about suffering in positive terms - as a gift, an opportunity, and not that I was suffering for something I had done wrong, or because I needed to learn a lesson or because God was trying to punish me or my children. It was the first time I had been encouraged to just “sit” in my suffering instead of trying to fix it or get rid of it. It was what taught me to embrace and truly be thankful for anything and everything. It taught me that suffering is wrapped in God‘s love for us, not his condemnation. I read something somewhere that more or less said, “shall we thank God for the sparkling white snow and then curse Him when that same snow turns to sludge and mud? Is it not still the same snow?” I began to see that the events in my life that I was labeling as “bad” were actually the events that were shaping, molding, chipping away my harsh edges, breaking and softening me, and then ultimately rebuilding and restoring. There is a phrase in Orthodoxy that says, “out of death, springs life.” This is why certain Orthodox crosses look like they are budding on the end...new life springing forth from death on the cross. This is from the verse that says, “unless a grain of wheat falls into the earth and dies it remains alone, but if it dies it bears much fruit.” All of these events that I was resisting, fighting, and questioning, were in fact the very events that I needed to lean into and embrace with gratitude.

But beyond the utilitarian purpose of suffering, I have come to see that what lies behind it all is God‘s love. As a parent, I do not think there is anything harder in the world than watching your child suffer. The gut reaction is to fix, help, take their pain away. As I have watched my son struggle to swallow, move, eat, and eventually sit, stand and walk, the hardest thing to do is to keep my hands off and allow him to relearn for himself. I know that his independence is the ultimate goal, so I have to sit back and let him struggle. I have come to understand that it is so with God. Nothing produces personal growth like suffering. It has a purifying effect that is quite unlike anything else. I know that with every painful movement and in all of his struggles to recall and retain, is God’s mercy. It is God offering more life, more freedom, more of Himself.

For those of you who have been so kind as to offer love and prayers on my son's behalf, please continue to pray for a complete bodily healing. But beyond that, pray that he would respond with grace, strength and acceptance to the path that lies before him. Pray that he would be shaped and refined and that the suffering would produce love and peace in him. Our ultimate and desperate prayer is that this tragedy would not be wasted, but that it will produce spiritual and personal growth, a softening, an understanding , a reawakening. Pray for all of us and those around him that we would be humbled, broken and changed. Truly the greatest tragedy would be for an event like this to leave us all unchanged.

“For a wheat seed to come fully into its own, it must come wholly undone. The shell must break open, it’s insides must come out and everything must change. If you don’t understand what life looks like, you might mistake it for dying.”
-A quote from a wise wheat farmer-

Corey Hatfield is a parishioner at St. Spyridon Church in Loveland, CO along with her husband, Arin and their five children. She is the owner of an interior decorating an...[more]
[click here to view all Parish Life posts]
“An Orthodox community where people find transformation in Jesus Christ.”

Corey Hatfield is a parishioner at St. Spyridon Church in Loveland, CO along with her husband, Arin and their five children. She is the owner of an interior decorating and remodeling business. Questions or comments may be directed to her via her website (