The Light of Orthodoxy 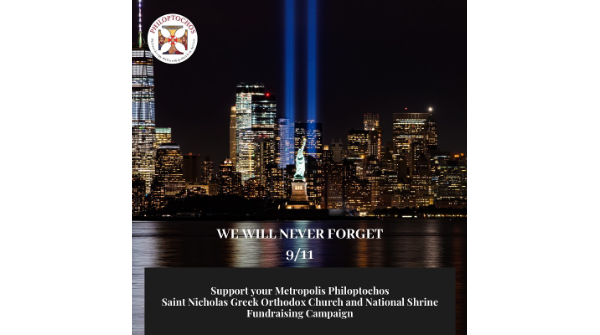 St. Nicholas Greek Orthodox Church and National Shrine
Help Philoptochos bring the light of Orthodoxy to the world!
As the world commemorated the 19th anniversary of the September 11 terrorist attacks in New York City, the Greek Orthodox Church of St. Nicholas, which was destroyed at Ground Zero, is rising again.
After years of delay, the shrine is set to open its doors on Sept. 11, 2021, the 20th anniversary of the attacks. The iconography of the shrine -- 56 icons in total -- is being created and shipped from the monastery at Mount Athos in Greece.
“In 2021, on the 20th anniversary of 9/11, we will open this church,” said Archbishop Elpidophoros. “We will open it with prayer, we will open it with thanksgiving, and with a welcome for all people.”
St. Nicholas will serve as a declaration of our Orthodox Christian faith to the world and stand as a beacon of love for all religions and for millions of people who will come to pray and reflect at the National September 11 Memorial & Museum.
On Sunday, Sept. 6, the CBS program “60 Minutes” aired a powerful, moving segment about “the resurrection of St. Nicholas Church … as a monument to death, life and unremitting faith.” Take a few minutes to view this powerful piece and other resources.
With a year of construction left, St. Spyridon Philoptochos is joining other Philoptochos chapters across the country to get the church across the finish line. Please help us be a part of completing St. Nicholas Greek Orthodox Church and National Shrine with a donation.
Donate by:
• Placing a check made out to St. Spyridon Philoptochos with “Shrine” in the memo line in the Poor Box or mail it to the church directly
• Going online to the St. Spyridon Website  here: Philoptochos Donations .
For more information on the rebuilding of the church please see the links below:
60 Minutes Program on St. Nicholas Greek Orthodox Church and National Shrine
Mount Athos Monks Create St. Nicholas Iconography
St. Nicholas to be Place of Solace, Reason for All Faiths, Backgrounds

Dimitria Hurst is an active leader and member of St. Spyridon and the local Philoptochos Society chapter....[more]
[click here to view all Parish Life posts]
“An Orthodox community where people find transformation in Jesus Christ.”

Dimitria Hurst is an active leader and member of St. Spyridon and the local Philoptochos Society chapter.