Our parish is blessed to operate under the guidance and leadership of His Eminence Metropolitan Isaiah of the Greek Orthodox Metropolis of Denver. Click here to watch a short video about His Eminence.

We also have wonderful clergymen and staff members who have willingly offered themselves and their unique gifts to the service of Christ and His Church within our local parish. We are thankful for the steadfast commitment of our leadership to bear the light of Christ in peace, love, and humility.

Fr. Evan Armatas
Father Evan received his Bachelor's Degree in Philosophy from Boston College with an emphasis in business management and Christian apologetics in 1991. He earned his Master of Divinity from Holy Cross in 2002 and served as an assistant priest for five years at Saint Catherine Greek Orthodox Church in Greenwood Village before being assigned as St. Spyridon’s first full-time priest in August of 2007.

Father Evan's current parish of Saint Spyridon began humbly, in its first year only six families called St. Spyridon home. Today it is a vibrant and growing parish of several hundred. The ministries and members of the parish represent a wide range of backgrounds and interests which make the parish a diverse place of worship, witness, and service. In August of 2018 the parish moved into a new 18,000 square foot sanctuary and facility.

In 2002, Father Evan founded the St. Nektarios Education Fund, a non-profit student education program. The fund, which he still manages along with its board, has established five schools in Africa, educated over 5,000 students and delivered over $1,000,000 in student aid through its network partners of IOCC and OCMC.

Father Evan has served as the Metropolis of Denver Program Director of Camp Emmanuel, its summer youth camp program, and as the Metropolis Clergy Syndesmos President. You will find podcasts by Father Evan at www.SaintSpyridon.church, and you can listen to his live call-in radio show called “Orthodoxy Live” on Ancient Faith Radio, which broadcasts every Sunday night at 5 pm Pacific/8 pm Eastern.

Father Evan his wife Presbytera Anastasia are the happy parents of three daughters, Alexia, Eleni, Maria, and a son Spyridon; they live in beautiful Fort Collins, Colorado where they ski, flyfish, and hike.

Dn. Mark O'Dell
Having retired from nearly 33 years of government service, Dn. Mark returned home to Colorado and joined the community at Saint Spyridon Church in 2010. Dn. Mark completed the St. Stephen’s course of studies and was ordained to the diaconate in 2003. He served for nearly 8 years as a deacon at Holy Cross Orthodox Church in Linthicum, MD. Dn. Mark received both his MBA and BS (Math) degrees from Colorado State University.

Sh. Ina O'Dell
Sh. Ina O’Dell, Director of Christian Education, came into Orthodoxy in Connecticut with her husband and sons in 1995. They were then transferred for work to Washington D.C. in 1996. They were members of Holy Cross Orthodox church in Maryland for 14 years before moving back to their ancestral home in Colorado to care for her parents in 2010. She was first tasked with teaching something in 1969, and has been at it since then in various forms—including homeschooling her sons for 17 years. At St. Spyridon she created a ‘Special Space’, Montessori-type program for the 2 youngest grades and has been writing a 4-year, 101 Lessons in Scripture curriculum for 2nd grade to adult.

Dn. Eugene Todd
Dn. Eugene Todd grew up in Colorado graduating from Metropolitan State University. After serving in the U.S. Marine Corps as a Naval Aviator, He and Diakonissa Charlotte returned to Colorado where they and their 6 children were received into the Orthodox Church in 1997. He works for a major airline training pilots and is on the volunteer ski patrol at one of the areas here in Colorado. Dn. Eugene attended the Deaconate Program at Hellenic College Holy Cross in Brookline, MS and was ordained to the Diaconate in 2019.

Dk. Charlotte Todd
Diakonissa Charlotte graduated magna cum laude from the University of Denver, where she earned her Bachelor of Music in Vocal Performance. She married Marine officer Brian Todd (who is now Dn. Eugene) in 1984 and lived in many places as a result. She and Brian, along with five of their six children, entered the Orthodox Church in 1997. She began chanting in 1998 and has attended numerous music and chanting workshops at the Sacred Music Institute of Antiochian Village in Pennsylvania. She has been leading the chant ministry at St Spyridon since 2008 and she initiated the St. Spyridon youth choir in 2009. Dk. Charlotte homeschooled her children for twenty-two years, and several of her daughters have become active in the chanting ministry along with her. Dk. Charlotte has been active in several choirs and vocal ensembles over the years, including the Denver-based Orthodox Octet directed by the late composer Richard Toensing. She also enjoys hiking, knitting, baking, and reading.

Chris Finger
Chris is a graduate of the Sacred Music Department at Moody Bible Institute in Chicago, IL. After marrying Barb in 1967, they moved to Boulder, CO where Chris earned a Bachelor of Music Education degree from CU in 1969. After teaching Choral music for 7 years at 2 Jr. High schools and First Presbyterian Church in Boulder, Chris started a piano tuning and rebuilding business which eventually became Chris Finger Pianos in Niwot, CO, specializing in complete piano restorations and importing the finest quality pianos from Germany. Chris is married to Barb and they have 3 children and 6 grandchildren. Their oldest son Christian lives in Nashville with Cara and children Caroline, Corinne, and Christian IV; daughter Kimberly and husband Dan live in El Paso, TX with children Andrew, Christiana, and Caleb; and son Jonathan lives in Westminster, CO. Chris and Barb joined the Orthodox Church on Holy Saturday 1998 and have attended St. Spyridon since 2008 assuming the position of adult choir director in February of 2009.

Darrell Fox
Darrell, a Colorado native, and his wife Lisa have two children, Abigail and Benjamin. Darrell received a B.S. degree from Seattle Pacific University in nursing and a B.S. degree in perfusion technology from Rush University in Chicago. As a perfusionist, Darrell assisted Cardiac surgeons along Colorado’s Front Range. He is now semi-retired and works part-time as a private duty nurse. Darrell entered the Orthodox Church in 2008 and serves St. Spyridon as the sacristan (sexton), manages the church’s bookstore, leads the Side by Side support group, helps lead the altar care, altar server, and burial society ministries, and assists with the men’s group. 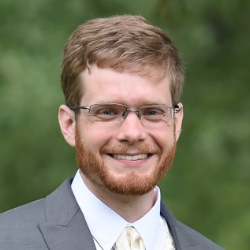 Gabriel McHugh
Gabriel was born and raised in Santa Rosa, California. He received his bachelor’s degree in mathematics from Sonoma State University in 2015, before moving to Boston, Massachusetts to attend Holy Cross School of Theology. While living in Boston, Gabriel also completed a master’s degree in mathematics, taught middle school math at St. Herman of Alaska Orthodox Christian School, and taught freshman math classes at Hellenic College. He graduated from Holy Cross with a Master’s of Divinity in May 2020. He and his wife, Mercy, and son, Joseph, moved to Loveland in May 2020. Gabriel now serves as the All-Youth Director at St. Spyridon and coordinates programs and events for children, youth, college students and young adults in the parish. In his free time, Gabriel loves spending time with his family, hiking and exploring outdoors, and practicing Byzantine chant.