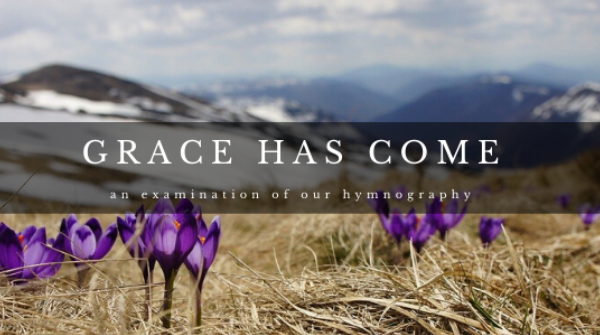 Repetition is the key to learning. It has been commonly known for generations now that an effective means of applying repetition is to tuck bits of information into melody so it sticks deep in the memory. The Church in her deep wisdom has applied this knowledge to encapsulate vast amounts of Theology and pass it on to the people in the form of the hymnody of our services. Some of this material is directly from the scriptures while some is an unpacking of the didactic teaching revealed through the Holy Spirit working in the Church.

For most of us, Sunday Divine Liturgy is the service we most attend and rightly so. This service is the mini-Pascha of our week: The Lord’s day. As the 8th ode of the canon of Pascha proclaims:  “This is it, the day that is chosen and Holy. Day one of the Sabbaths. It is the queen-day, the Lord’s day.” As the Resurrection of our Lord is proclaimed in greatly magnified proportion during the Paschal season, so each Sunday proclaims the resurrection in multi-faceted detail throughout the remainder of the year.

Beginning every year at Pascha, the hymnody of each week proceeds to reveal a number of revolving layers on an 8-week cycle. There are other revolving cycles that proceed through the year as well, but the focus here is on the Ochtoechos; Greek for “eight modes.” The development of these 8 modes is traditionally attributed to St. John of Damascus in the 7th-8th centuries though evidence suggests that the foundations of the system may be much older. The modes are foundational to all of the hymnody of the Church but they are neither simple nor can they be explained adequately in brief. For the sake of the scope of this article, understanding that there are eight different modes--four authentic and their plagal relatives--is sufficient.

In this series, let us explore one particular hymn from each of the 8 modes of the Ochtoechos: The Vespers Theotokion, or also commonly called the Dogmatic Theotokion. This coming weekend we begin to see the standard cycle of hymns re-emerge from the pinnacle of the festive hymns of Pascha and Bright Week. As a result, the first mode we encounter in its normal place is mode 2. We’ll begin with mode 2 and finish the series with mode 1.

This hymn comes just before the mid-point of the Saturday evening Vespers service at the end of the set of hymns connected to Psalm 140, 141, 129, and 116.

“Grace has come, and the shadow of the Law has passed away: for as the burning bush was not consumed, so you gave birth as a virgin, and a virgin you remained. Instead of a pillar of fire, the Sun of Righteousness has risen; instead of Moses, Christ, the salvation of our souls.”

The opening line of the hymn seems to come directly from the Gospel of St. John 3:17 “For the law was given through Moses, but grace and truth came through Jesus Christ.” As Jesus came as the free gift of the Father, so grace is extended to each of us who join Christ.

The hymnographer next juxtaposes three contrasting images for us to consider. Each reveals a type that is familiar from the Scriptures and then how it is perfected in the work of Christ.

...the burning bush was not consumed, so you gave birth as a virgin and a virgin you remained

Exodus 3 reveals the typology of the bush that was not consumed. In this passage, God the Word manifests himself as a fire in the bush but without consuming it. The Orthodox Study Bible offers this note on the subject: “God the Word revealed Himself to Moses in the burning bush to forecast His coming Incarnation… The Bush was on fire but was not consumed, for the Son of God became Man to save man and not consume him. He became Man in the womb of the Mother of God, for the bush itself typifies her.”

...Instead of a pillar of fire, the Sun of Righteousness has risen

As the nation of Israel wandered in the desert, God sent a pillar of fire by night to guide the people. This guide gives light to the pathway in darkness. The pillar of fire is a type of Christ--named the Sun of Righteousness--who enlightens our way in darkness after baptism. Though not mentioned in this hymn, the pillar of cloud which guided the nation of Israel by day is explained by St. Basil the Great as a foreshadowing of the Holy Spirit who, at our baptism, cools the passions of sin and offers guidance to our lives.

...Instead of Moses, Christ, the salvation of our souls

As Moses lead the nation of Israel to the promised land, so Christ leads us to the Kingdom of Heaven.

These three parallels are brought forth from Holy Scripture as reminders of Gods plan for salvation from the beginning.

We may perhaps have something deeper to explore with the ideas presented in this hymn. As we each become grace to those around us, the law is overshadowed. Not destroyed but fulfilled. As Jesus taught in the Gospel of St. Matthew chapter 5:17 “Do not think that I have come to destroy the Law of the Prophets. I did not come to destroy but to fulfill.” As love for all becomes the thing that consumes our actions and thoughts and words every day, the shadow of the Law is driven back by the illumination of Christ in our souls.

After exploring the didactic portions of this hymn, we could maybe distill the deeper message of the text to: Grace has come, Christ, the salvation of our souls.

May we each find Grace to become Grace through our Lord and Savior Jesus Christ.

CLICK HERE to listen to a wonderful rendition of this hymn.

Matthew serves at St. Spyridon Orthodox Church with his wife Tamara and two children. He studies Byzantine Chant and sings with the parish choirs....[more]
[click here to view all Living Faith posts]
“An Orthodox community where people find transformation in Jesus Christ.”