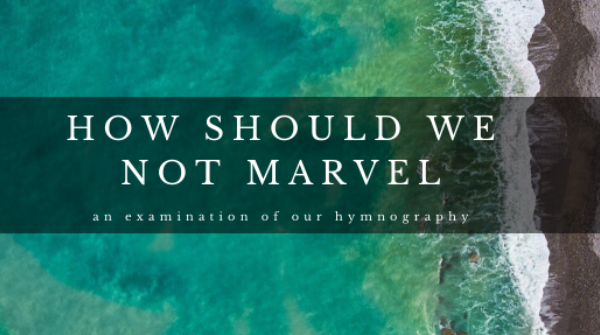 I’ll never forget the weekend of February 2, 2017. A few of us from the parish drove down to the quiet, hidden town of Cañones, NM to visit the small monastic community at the Holy Archangel Michael Monastery. At the time, there were 8 brothers living in small cells in the Piñon forest around the adobe katholikon and grounds of the monastery. As we stood in the candlelit nave during the first Orthros service, it felt like we were transported to another world. The experience was as close as I can imagine to that of Bilbo Baggins in The Hobbit who, upon hearing the dwarves chant of their lost home under the mountain “felt the love of beautiful things made by hands and by cunning and by magic moving through him … and he wished to go and see the great mountains, and hear the pine trees and the waterfalls, and explore the caves, and wear a sword instead of a walking-stick.” I imagine this is the stirring of our souls to be forever in the presence of our creator and worshipping Him in endless song.

One set of hymns in particular captured my attention over the course of the weekend as it was chanted each morning during the Orthros service. As this was the feast of the Presentation of our Lord in the Temple, the Katavasias of the Presentation are prescribed for the service. The sweet melodies with their long melismatic tails which I later learned are characteristic of mode 3 carried the text on a stream of gently rippling crystal.

In this second part of our examination of the Dogmatic Theotokia of Vespers, we come to the mode 3 hymn which is carried on the same glittering melodic phrases as the Katavasias of the Presentation. As with each of these hymns, it is more about Christ than the Theotokos but teaches us of her proper position in the great picture of salvation.

How should we not marvel at your Child, both God and man, O all-honorable Virgin? For you knew not man, O all-blameless one, yet bore a fatherless Son in the flesh, who was begotten without mother before the ages; who in no way suffered change, or confusion, or division, but preserved whole the property of each essence. Wherefore, O Lady, Virgin Mother, entreat him to save the souls of those who rightly confess you to be Theotokos.

This hymn opens with a question inviting us to consider the paradox that a virgin could have a son who is both fully God and fully man. Paradoxical that a virgin can give birth to a child. Paradoxical that someone can be both fully God and fully human.  It is posed in a curious way--for we, in the West have it ingrained in our schooling to examine and conclude things based on scientific reality--by giving us the correct conclusion to the paradox: that of wonder or astonishment. The natural state of humanity is to worship the Son of God.

The hynographer then elaborates on how the Church views Mary, the “all-blameless one;” who through her complete and total love for God was chosen to bring the “fatherless Son” into this world in the flesh. The rest of this line reads much like the Nicene Creed we recite as a summation of our faith:

“...in one Lord Jesus Christ, the Son of God, the Only-begotten, begotten of the Father before all worlds, Light of light, Very God of Very God, begotten, not made; of one essence with the Father” Orthodox Study Bible

Much of the work of the seven Ecumenical Councils was to canonize the official teachings of the Church and serves as a large part of the lense we view the Holy Scriptures through. Each of the Councils was, at least in part, addressing heretical belief systems that had cropped up among the widespread Christian communities of the first millenium after Christ walked on the Earth in the flesh. Doceticism is the teaching that Christ was indeed divine but only “appeared” to be man. Marcionism teaches that God was not the Father of Christ but rather they were two separate “gods.” Sabellianism holds that the Father, Son, and Holy Spirit are but “modes” of the one God or masks worn by one God. Famous for his being a primary cause for the calling of the First Ecumenical Council, Arius taught that Christ was a created being rather than God himself in the flesh. Pelagianism taught that man was capable of finding salvation outside of divine grace. Nestorianism held that Christ was two persons conjoined in one.

So we see that in a few short lines, this hymn takes on all of the major heretical beliefs about Christ that had arisen in the early centuries of the Church. In wonderful poetic style, the hymn elaborates on the dogma that Christ is both fully God and fully man: “who in no way suffered change, or confusion, or division, but preserved whole the property of each essence.”

As is so common in our hymnography, this hymn speaks directly to Mary, the God-Bearer, that she entreat Christ to save our souls. This theme of asking intercession from the Mother of God comes directly from the Gospel of St. John 2 where Jesus, his mother, and disciples were at a wedding in Cana. “And when they ran out of wine, the mother of Jesus said to Him, “They have no wine.” Jesus said to her, “Woman, what does your concern have to do with Me? My hour has not yet come.” His mother said to the servants, “Whatever He says to you, do it.” Mary comes directly to Christ on behalf of the guests at the wedding. Even when he refuses her request, she knows he will meet the need. She acts on the belief before even having evidence by telling those at the party to “do what he says.”

Notice the “contingency” at the end “those who rightly confess you to be the Theotokos.” We collectively ask through our right belief in the nature of Christ and the position of Mary in the process of salvation, that Christ grant salvation to our souls.

Matthew serves at St. Spyridon Orthodox Church with his wife Tamara and two children. He studies Byzantine Chant and sings with the parish choirs....[more]
[click here to view all Living Faith posts]
“An Orthodox community where people find transformation in Jesus Christ.”