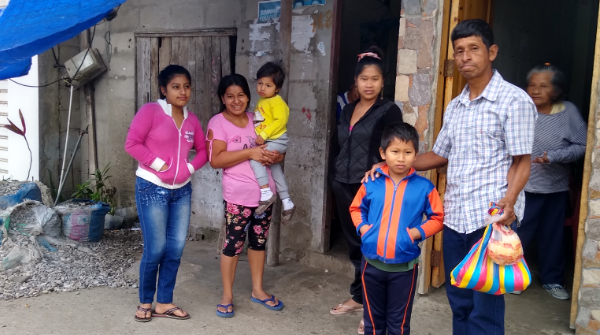 Ever wonder what it is like for our incredible Panaghia's Pantry service leaders?  Enjoy this heartwarming post from Vasili and Yota about their most recent delivery on August 22.

"This week we delivered on Saturday because our friend Alfonso was not available Thursday. His wife and our dear friend Mary went with us to help

We went to a town called Valdivia where we have been before but were up in the hills so we went to a different sector to deliver to those we had missed before.

On the way to Valdivia we stopped on the highway and gave a food kit to a man who lives alone.

When we arrived in Valdivia we stopped at the house of a gentleman we know. He sells fish from his small motorcycle in the towns and villages in our area. He had not worked, then he became very sick with COVID19, we could not believe how much weight he had lost. Finally 3 weeks ago he was able to return to work. Two days later he was hit by another motorcycle, injuring his leg and his motorcycle is now inoperable. The majority of people here do not have insurance so the repairs will come slowly.

We visited for a bit and Vasili gave him his food kit. As I was watching Vasili and him I saw Vasili take off his shoes then he set them on the ground in front of the man. When I looked at Vasili I could see tears in his eyes. I could not believe what he had just done, he never ceases to surprise and amaze me. Later when I asked him why, he said it always bothered him when he’d see this man selling fish from his motorcycle wearing cheap rubber flip flops. Now hearing about his accident Vasili stepped forward. Then he proceeded to walk through town in his stocking feet to deliver the remaining 83 bags. Alfonso took a video of this while I was still trying to figure out what had just happened.

We saw many elderly people and a blind lady who was helped by others, some looked so thin and frail. Others looked sad and tired.

Multiple families with children sharing a single bamboo house. Some children are smiling without being asked to, others will smile when I ask, sometimes several times and yet others no matter what I say or do there’s just no smile. One little boy looked in the bag and saw the lentils, he got so excited and got the biggest smile on his face as he kept repeating lentils. That’s all it took, a food that he loves and knowing he was going to be able to enjoy some.

When we had about 15 bags left people came towards us walking fast or running so we handed out the remainder from the car on the street until all the food kits were gone.

This delivery week was week 13 for a total of 1105 kits. We have also been contacted and asked for help 3 times separately, we keep a few bags of each item except chicken for emergencies, so actual total 1108 kits!

We will see where next week will take us, maybe somewhere we have never been.

Hugs from Ecuador, Vasili and Yota"

Maria Tschetter recently served as the Parish Council President at St. Spyridon for 6 years. She is an active board member of the Ladies Philoptochos Society and co-minis...[more]
[click here to view all Parish Life posts]
“An Orthodox community where people find transformation in Jesus Christ.”

Maria Tschetter recently served as the Parish Council President at St. Spyridon for 6 years. She is an active board member of the Ladies Philoptochos Society and co-ministry leader for Panaghia’s Pantry and Senior Support Angels. She and her husband Jon and their children have faithfully served the parish since its formation as one of the six founding families of St. Spyridon.